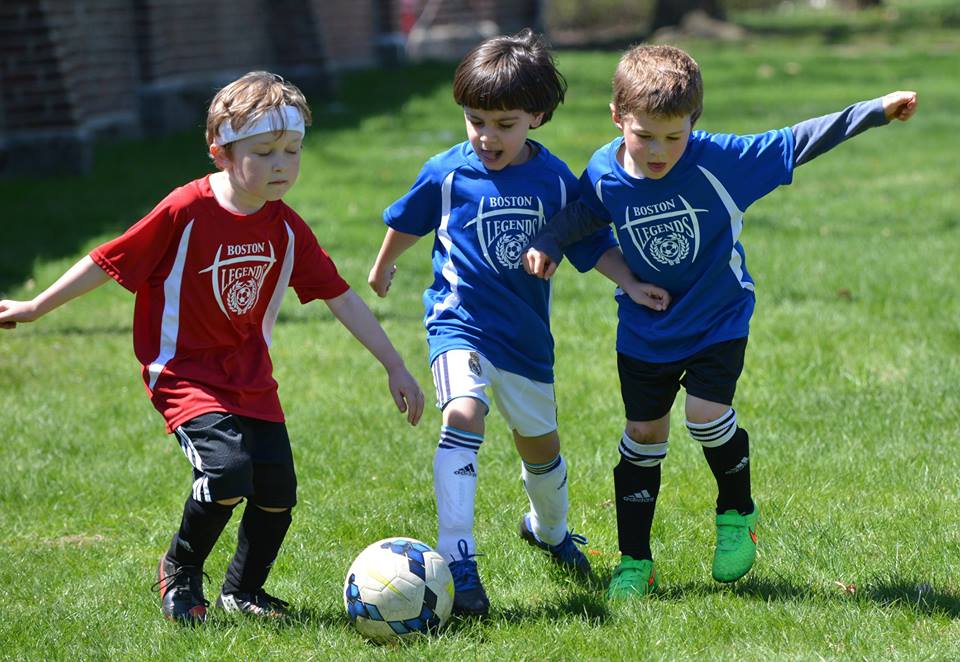 What will my child get from the Legends Academy that he won't get with another program?

How long do I sign up for?
One month at a time. The Academy program is totally flexible. You can come and go on a month by month basis as you please.

What percentage of graduating Legends players get to play in College?
Over 85% of players from the first 7 teams to graduate from the club have played, or are playing, in College.

Why do the Legends players get such success with College Scholarships?
Showcasing for College is where the tremendous individual skills our players have previously developed really become essential because extremely difficult combination skills can only be performed by players with great dribbling skills and ball striking ability. Thus the absolutely fantastic quick release skill and dribbling ability we develop in our players allows us to develop an incredible team player who is very attractive to the college coach. Other programs that didn't first spend the necessary time on developing a fantastic individual player cannot hope to compete for college scholarships in the way that our players can. At age 17 our players play faster, have greater confidence, look better on the ball, can score goals, beat players, defend well in 1 v 1 match ups and combine in and around the opponent's penalty area to create goal scoring opportunities. When a player can do all this everything else is easy.

Through the years we first work the more complex individual skills. Then we work the more complex individual tactical equations involved in the 1 v 1 situation and eventually the more complex tactical situations involved in the 2 v 2. Throughout the whole process we gradually operant condition the appropriate game responses by mandating certain responses i.e. early shot, pass or fake. We will never work with a ball ratio of greater than 2 v 2 because we are able to create a more complex tactical challenge than any ever encountered in the 11 v 11 game by practicing two teams together and forcing the players to utilize maximum cognition, perception, assimilation and task selection abilities under pressure at every practice. The practice expectations we have of our players exceed anything they will face in the game situation by a country mile. Therefore, after doing this for a few years the "real game" is a technical, tactical, physiological and psychological breeze.

Furthermore the players love it. They spend their time playing an exciting version of the game in a crowd where theirs and their opponent's goals are only twenty yards apart. Every second they are optimally challenged to the maximum of their ability. The end result is a player who loves the game, has great individual and team abilities in the clutch defensively and offensively and, therefore, the ability to lead the team to victory.

College coaches love this type of player because they make the plays that win games.

How do you divide up playing time?
We believe in equal playing time for all players who consistently attend practice. We do not play a bench. We believe that keeping our stronger players on the field at the expense of playing time for our weaker players is unfair and ends up de-motivating the weaker players and teaching the stronger players that it is OK to be unfair as long as the team wins. The only justification for unequal playing time is the statistical win and we believe that this is a cynical ego driven motive that has no place in youth sports where development should be the paramount consideration

How do you train positional play?
We train utility players who are able to play numerous positions because their ability with the ball and situational versatility gives them a breadth and depth of talents and skills applicable to a wide variety of situations. We position players much later than other youth clubs because our focus is on maximizing the abilities of each individual not winning games.

Why do you win so many games if your focus isn't on winning?
The reason we win so many games when the teams mature is because we never focused on the wins and losses as the players were developing. Children can only develop incredibly creative skills and a risk taking mentality when they are given complete encouragement and support to take the risk in all situations where there is a much easier and often fear based option. We focus on the development of the brilliant individual player and leave the integration of the team until its logical place i.e. after the individual brilliance is set in stone. It is almost impossible to beat a team of brilliant individuals who have learned when and where to use their teammates effectively. That’s why Brazil have won so many World Cups.